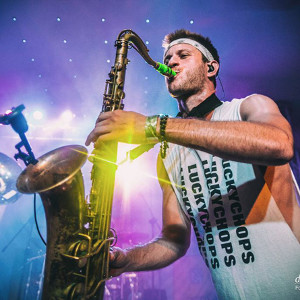 These mouthpieces are fun to play! The good folks at Syos are doing a great service for saxophonists - they're researching and crafting mouthpieces that suit the specific needs of each individual musician, enabling us to further explore our individual sounds. And who doesn't want to play a green mouthpiece! ;)

Daro Behroozi plays tenor and baritone saxophones and bass clarinet in Lucky Chops, an internationally touring brass band. Hailing from Brooklyn, NY, he also performs locally as part of the city's improvised music scene. He channels a diverse range of influences in his music, reflecting the wide range of musical cultures he has encountered through mentors, peers, and independent exploration. He has also been active as a cultural organizer, educator, archivist, oral historian, and anti-war activist, and seeks to promote healing and social transformation through his music.

Much of his solo work explores the possibility of building a decolonial intercultural framework for music-making and community organizing, inspired by the work of Hafez Modirzadeh, Fred Ho and others. His group, Ensemble Fanaa, pursues this project by drawing from a pan-Islamic sonic palette and launching a historical investigation into Islamic international sonic flows, which can be heard on their 2018 self-titled release. He also performs with the Afro-Yaqui Music Collective, a Pittsburgh-based group committed to global sonic synthesis and revolutionary matriarchy. In addition to his musical projects, he also dedicates time to anti-war activism and researching music, spirituality, and revolutionary politics.