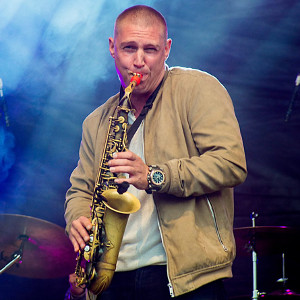 Syos mouthpieces are like no-other. Powerful, responsive and free blowing. A Meyer with a turbo. You also have the option to change the design with almost unlimited possibilities to create you perfect piece.

James Morton is one of the most exciting saxophone players of his generation. After his critically acclaimed release Don’t You Worry ‘Bout That (2010) by James Morton’s Porkchop, his highly anticipated new solo album The Kid is due for release in June 2016 with an array of special guests including Fred Wesley, Pee Wee Ellis, Andy Sheppard, Ollie Teeba (The Herbaliser), Ian Mathews (Kasabian) and The Easy Access Horns (The Herbaliser).

These days, James regularly plays with his idols – he has worked extensively (15 years) with Pee-Wee Ellis and recently recorded (and performed) with Fred Wesley and The New JB’s. He is also a member of British hip-hop legends The Herbaliser who he continues to tour and collaborate with. His unique lyrical and rhythmic style, which allows him to directly “speak” to his audience, conveys a strong sense of emotion that really connects with people and is what makes him such a special – and in demand – player.

Throughout his career James has worked with some of the world’s best known and exciting artists, including Kasabian, Raphael Saadiq, Pendulum, George Clinton, Tony Allen, Roni Size, Angelique Kidjo, Carleen Anderson, Jazz Jamaica and Fred Wesley and The New JB’s, to name a few. Most recently he worked as part of NPG Hornz playing with Liv Warfield and other members from Prince’s band and in 2014 he was appointed Ambassador of Music for his home town, Bristol.