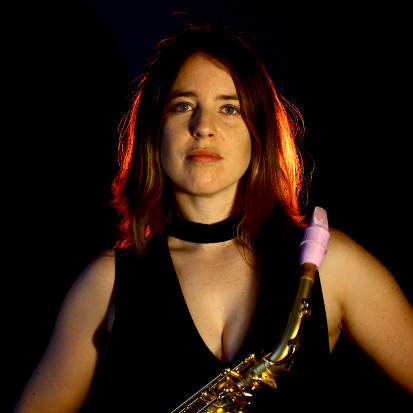 I fell in love with Syos when I first tried my bandmate's model and was super jealous of the power, response and flexibility of tone. Fortunately my old mouthpiece broke shortly afterwards and Syos instantly came to my rescue! It's definitely added a new flavour to my live improvisations- I'll be sticking with Syos from now on!

Liza imagines stories and writes the music to bring them to life. Taking inspiration from the dark, unswept corners of slightly unhinged minds, she combines intricate layers of woodwinds and vocals with sprinkles of genres from folk and electroacoustic to rock and beyond. Her most recent EP and short story Beyond the Blonde was released on limited edition vinyl in May 2018.

She has collaborated with electronic artist James Holden on his latest release The Animal Spirits (2017), co-writing and playing treble recorder on the track Spinning Dance and continues to perform on sax, clarinet and recorders with his band across Europe.

Originally a classical clarinettist and saxophonist who trained at Trinity College of Music, London, her life was transformed when she was diagnosed in 2008 with a rare form of reflex epilepsy, triggered by playing certain patterns of notes. “I had to re-learn how to play”, Liza says. “I spent several years without playing a note. My first gig was with The Memory Band at the album launch (for Oh My Days)…. I cried buckets afterwards as I just couldn’t believe that I was back performing again.” She then released an album with original rock band Bordello Rose to positive reviews in Prog! and Team Rock magazines.

Liza is proud to have been funded by Help Musicians UK’s Fusion Fund to work on her current project, which combines stories, recorders and synth with audiovisuals to communicate the essence of music triggered epilepsy.