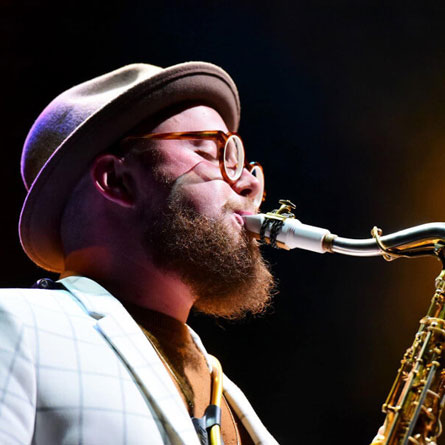 I had almost given up on finding a mouthpiece, which really fit me, my expectations for sound, quality and the feeling of playing it, without having to give too big of an effort to make it sound like I want it to. But as I tryied Syos mouthpieces everything changed. This mouthpiece fills all my expectations of the perfect piece. It feels more like a part of my body, than a part of my saxophone. It sounds like me without any effort. I'm absolutely gratefull to play Syos mouthpieces on all my horns!

Simon Spiess could through his talent already with 15 years of age share the stage with Randy Brecker, Donny McCaslin, Grreg Tardy, Michael Backer a.m. (Jazzaar Concerts Aarau) and with 17 begin his studies at Musikhochschule Basel, from where he graduated as Master of Arts in Musikpädagogik.

The musician was three times awarded with prizes for his tireless work in various projects and thereby lived in Paris an Berlin (Rentsch 2011, Kt. Solothurn in 2012 and Kt. Aargau 2014).

Simon Spiess is a very sensitive and open musician and composer, and through his work as a bandleader and sideman, he has made a name in the Swiss scene, which steadily extends around the world.