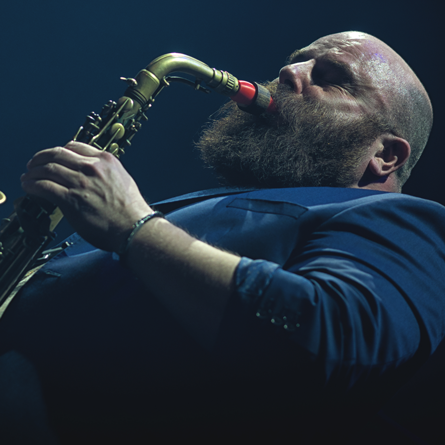 Thomas de Pourquery began the saxophone at 14. He became the student of Stefano Di Battista, and then entered the conservatoire national supérieur de musique de Paris in François Jeanneau's class.

In 2000, he is hired in Big Band Lumière, then in the Orchestre national de jazz directed by Laurent Cugny. He then became an active member of the Falaises à Paris collective with Maxime Delpierre, Laurent Bardainne, David Aknin, Sylvain Daniel. He also played with George Brown, Sunny Murray, Marc Ducret, Paco Séry, Linley Marthe, Billy Hart... In 2002 with Daniel Zimmermann, he won the first price of orchestra and soloist at the competition of la Défense with the de Pourquery-Zimmermann Quintet which then became DPZ. He sings and plays saxophone in the punk collective Rigolus and then integrates Andy Emler's MégaOctet.

In 2009 with DPZ he releases the LP He’s Looking at You, Kid. Thanks to the success of that LP he becomes resident for 3 seasons at the festivalJazz sous les pommiers in Coutances. En 2010, he creates The Brain Festival, a caritative festival aiming at supporting the research on neurodegenerative diseases. En 2012, he releases the LP The Endless Summer et creates DPZ & The Holy Synths.

2014 is the year of Play Sun Ra, his first LP with Supersonic sextet, create in 2011 with Laurent Bardainne, Fabrice Martinez, Arnaud Roulin, Frederick Galiay and Edward Perraud. It is awarded best album of the year at the Victoires du Jazz in 2014 and finalist of the Prix du disque français de l'Académie du jazz. The same year, he creates the pop duo VKNG with Maxime Delpierre, signed with Naïve Records.