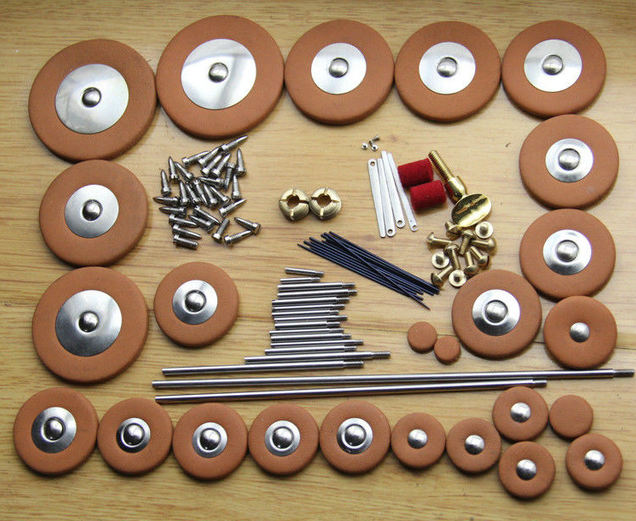 What is the acoustic role of saxophone pad resonators?

Different notes can be played on musical instruments of the woodwinds family thanks to lateral holes which allow to change the length of the air column. In all modern instruments, a complex system of keys, which help open and close these holes, has been designed.

A pad, mostly made of leather-covered cardboard, is glued inside each key and acts as a seal to prevent leakage. Sometimes, especially in the saxophone case, a resonator is attached to the middle of the pad. Resonators can have different shapes (flat, dome-shaped, waves ...) and they are made of various materials (plastic, copper, brass and even gold!). But what exactly is the role of these resonators and why are they called in this way?

To understand their role, we realized an experiment. We measured the input impedance (read our article on Input impedance: an essential tool to understand wind instruments) of a cylindrical pipe closed at the end by a key. We used three identical keys, each with a different pad: a pad with a metal resonator, one with a plastic resonator and the last without any resonator.

The figure above shows that the first impedance peak of the pipe closed by the pad without resonator is very low, which means that the pad absorbs a lot of acoustic energy. Pads with plastic and metal resonators have similar low frequency behavior: they reflect acoustic waves much more than the pad without a resonator.

Indeed, the figure above shows that the second and third peaks are damped for the pad without resonator when it is at a distance of 1 mm from the end of the pipe. The pad without resonator therefore has an absorbing effect for high frequencies. However, in the case of a real instrument, a distance of 1 mm between the pad and the hole can only occur in transient states (when the hole is opening or closing).

The distance of 5mm in the figure above corresponds more to an existing case, when the key is at rest on the saxophone (open hole). In this case, the differences in input impedance between the three pads are much less obvious, but can still be detected.

Effect of resonators on input impedance

Now it is interesting to watch the effect of the resonators on a complete saxophone. In this study we used four Yamaha YAS-480 saxophones with consecutive serial numbers. We first measured the input impedance of these saxophones that came directly from the factory and were equipped with plastic resonators. These measurements made it possible to verify that the four instruments were very similar since their impedances differed by less than 1 dB in amplitude and 5 cents in frequency, which is the order of magnitude of the limit accuracy obtained with the impedance measurement system used.

It can be seen on the figure above that the saxophones are very similar, with the exception of saxophone #38 which has lower impedance peaks. This is consistent with the behavior highlighted above for non-resonator buffers on a cylindrical pipe. If we look in detail, we can see that saxophone No. 38 has lower resonant frequencies than the resonant frequencies of the other three saxophones. Indeed, the saxophones were adjusted while they were equipped with resonators, so, by changing the pads by pads without resonator, the volume of the chimneys (when the holes are closed) is increased. This tends to lower the playing frequencies of the instrument. The amplitude is also lower by about 1 or 2 dB from the 4th impedance peak. Can we see differences for other fingerings? You can see the fingering of the Fa3, where about half of the side holes are closed. For this fingering, the resonance frequencies of the No. 38 saxophone are also lower than for the other saxophones, but the differences are less obvious than for the Sib3. For the Fa5, where all the holes except one are open, there are almost no differences between the four saxophones. This shows that the effect of the pads is cumulative with respect to the number of closed holes.

As a conclusion, it can be said that pad resonators have a measurable effect on saxophone acoustics. The reflection coefficient of the pad is increased by the presence of a resonator when the hole is closed and the amplitude of the impedance peaks of the saxophone is increased by several dB. This effect is larger with more closed holes. From an acoustic point of view, the term "resonator" is misleading because the resonator does not vibrate, on the contrary, it tends to dampen the vibrations of the pad. A "resonator" could rather be called a "reflector".

And what do the musicians say? To find out, read the second part of this study: Pad Resonators - Influence on Sound Perception