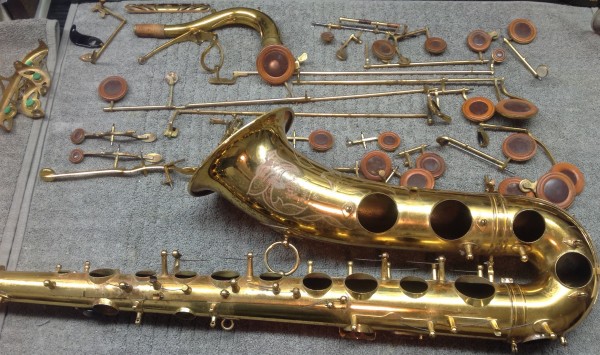 So I did a blind study with 13 saxophone players, using the four Yamaha alto saxophones described previously. Just a quick reminder:

The four saxophones were presented, randomly ordered, on a table. The musicians were asked to play all instruments for up to 15 minutes in order to familiarize themselves with the set. Then, for 10 minutes, the participants were asked to rate the brightness of the instruments, between 0 and 1. They were obliged to use the whole scale, so they had to rate the saxophone they found the least bright at 0 and the most bright at 1. Then, they had to follow the same process and rate the ease of playing and the evenness (how similar is the timbre over the full range of the instrument) of the saxophones. Subsequently, they had a break for about 20 minutes, after which I randomized the saxophones, and the participants were asked to repeat the rating of the saxophones.

The figure presents the average of the two trials of ratings for the 13 participants. It is clear that saxophone 38, which is the one without pad resonators, is perceived as the least bright and least easy to play. It is also rated as the least even, but the difference with the other saxophones is less obvious for this criterion. The three other saxophones have quite similar ratings, so it appears that participants did not find any significant difference in brightness, ease of playing and evenness between saxophones with plastic or metal resonators.

I also did some measurements of the pressure inside the musicians' mouth and at the bell, while they were playing the following arpeggio.

The purpose of these measurements was to characterize the effect of the pads on the musician's playing parameters and on the radiated sound. The pressure in the musician's mouth and the radiated pressure at the bell were measured while the nine notes were being played on the four saxophones. These recordings were realized three times in order to get a meaningful average.

We found that two characteristics were significantly impacted by the type of pads :

We would intuitively expect that the efficiency of saxophone 38 would be more different from the saxophones with pad resonators for fingerings involving a lot of closed toneholes (like Bb3 or D4) and much closer for fingerings with a lot of open holes (Bb4, D6 or F6). In the Figure above, the efficiency of saxophone 38 for Bb3 is indeed much lower than for the other saxophones. Nevertheless, the difference is quite constant over all the played notes. The efficiency is in fact calculated with an average pressure level over the whole frequency range, measured at the bell of the saxophone. This measurement at the bell is less representative of the overall radiated sound as more and more side holes are opened, since significant energy radiates from the side holes.

This study was done at the McGill University. Many thanks to all the saxophonists who participate to the experiment, and to Yamaha for giving the four saxophones used in the measurements. You can download the sientific article on this study here :